In 2011, Bunman et al.,1 discovered and developed cream extraction from the head of fish cartilage. In 2015, this material has been added to silver sulfadiazine for accelerate and facilitate wound healing and to promote collagen synthesis. In 2016, Bunman et al.,2 studied liver and kidney toxicity in rats receiving cream extraction from fish cartilage. This result demonstrated that cream extracted from fish cartilage accelerated and facilitated wound healing without causing toxic effects to the liver and kidney in rats in long term use.

In 2018, Bunman3 formulated a new serum for facial wrinkle relief and to promote collagen synthesis. The study demonstrated that this serum has accelerated collagen synthesis and low potential skin sensitization in rat models. In 2019, Bunman developed and formulated a new cream for facial care, Bright and Firm Hybrid Emulsion I. Bright and Firm Hybrid Emulsion I is composed of many active ingredients to reduce wrinkles, to promote facial whitening and collagen synthesis. However, this product hasn’t been investigated for potential skin sensitization in humans.

The aim of this study is to evaluate potential skin sensitization of applied Bright and Firm Hybrid Emulsion I using modified HRIPT.

The study had 130 subjects aged between 18-60 years. The subjects were informed of the HRIPT, including possible adverse skin reactions from this experiment. Written informed consent was obtained. Additionally, the subjects must be considered dependable and able to read Thai language,understand, and follow Thai instructions. Prior to test initiation, each subject completed a medical history form. The subjects selected met all of the inclusion and exclusion criteria.4

The HRIPT was used to assess the skin sensitization potential of the Bright and Firm hybrid emulsion I, which was modified from Chuenwattana et al., Politano and Api.4, 5 The amount of the test article applied per patch test was 0.2 g of test article and the patch size was 2x2 cm2 per patch test (Figure 1). Subjects, both male and female, applied patch tests. The placebo patch tests (containing 0.9% normal saline) were applied on normal skin at right scapula and Bright and Firm Hybrid Emulsion I patch tests were applied on normal skin at

left scapula. Subjects applied patch tests on Monday, Wednesday, and Friday for three consecutive weeks. All of the patch tests were removed 24 h after being applied and HRIPT scoring (Table 1) was evaluated. This procedure was repeated until 9 induction applications of the test article were made.

The challenge phase is 10 - 14 days after the induction phase. A single challenge patch is applied to a naïve site of normal skin on right scapula (placebo patch tests) and a Bright and Firm Hybrid Emulsion I patch is applied on left scapula. The subjects are instructed to return to the testing facility 24 h later for removal of the patch tests by the researcher. The challenge site is scored 24, 48, and 72 h after being applied and the experiment monitor was present at the 72 h HRIPT score reading.

The erythema scale is used to grade the degree of erythema (redness). A score on this scale was assigned following every application of a test material (Figure 2).5-7 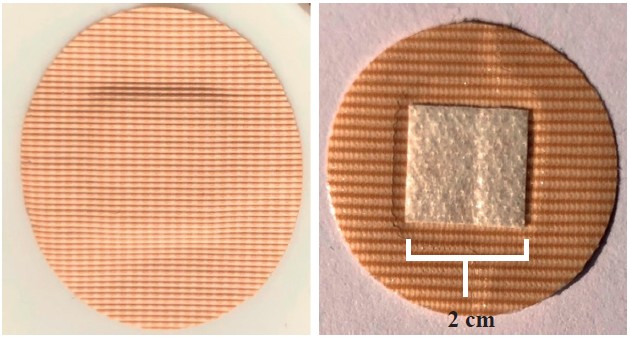 The definitions of evaluated skin response

Vesicles: small circumscribed elevations having translucent surfaces so that fluid is visible (blister-like); vesicles are no larger than 0.5 cm in diameter

Bullae : vesicles with a diameter > 0.5 cm; vesicles may coalesce to form one or a few large blisters that fill the patch site Results are expressed as means ± SD. The demographic data of subjects were analyzed using descriptive statistics. HRIPT scoring scale data were analyzed using independent t test, and using SPSS for Windows, version 22. Values of p < 0.05 were considered to be significant.

The HRIPT scoring scale of induction phase and challenge phase, edema, papules, vesicles, and bullae of subjects who applied Bright and Firm Hybrid Emulsion I were not significantly different when compared to the placebo patch test group (Table 3 and Figure 3).

The test results of the Bright and Firm Hybrid Emulsion I HRIPT procedure were interpreted with a HRIPT scoring scale among subjects aged between 18 - 60 years old, and a number of erythematous reactions were reported that included edema, papules, vesicles and bullae. Figure 3: A and D are normal skin. B applied a Bright and Firm Hybrid Emulsion I patch test and E applied a placebo patch test. C and F were challenge phase.

In 2008, the HRIPT protocol of The Research Institute for Fragrance Materials (RIFM)5 used the patch test containing a quantity of chemical concentration per skin area to evaluate skin irritation. In this study subjects numberejjjd 130. This is higher than a group of specimens in a statistical calculation of a patch test, adapted for the detection of reaction to chemical agents, observed in 100 test subjects.8 If there is no reaction detected in a test group, the chances of a positive reaction occurring in the marketplace will not exceed 2.9 % on a confidence level of 95%.

In this study, no reaction was recorded by any of the 130 subjects once the induction phase was completed. The HRIPT scoring scale is therefore “0”. The HRIPT scoring scale was re-evaluated in the challenge phase in order to confirm skin sensitization and all subjects reported negative results. This HRIPT study demonstrated that Bright and Firm Hybrid Emulsion I has low potential skin sensitization. It is an appropriate hypoallergenic product to be used for facial or body skin care.

The authors declare that they have no conflicts of interest.