Many occupations require people to have sufficient visualperformance to be able to work effectively and safely. Some jobsrequire high levels of visual function, such as operation of heavymoving machinery. Truck drivers must have normal color perception in orderto perceive colored signals correctly, and so as electricians. Some specifictasks, such as working in a confined space, have standards regulated by law.1,2These requirements are known as occupational vision standards.

The important law that provides requirements, guidelines, and standardswith which employers must comply is the Ministerial Regulation on the Prescribingof Criteria and Method of Conducting Health Checkup of Employees andForwarding the Results of Health Checkup to Labour Inspector B.E. 2547(2004),2 Labour Protection Act B.E. 2541 (1998), administered by ThaiDepartment of Labour. Furthermore, there are laws that offer standards forspecial tasks which require visual performance tests such as MinisterialRegulation on the Prescribing of Standard for Administration and Managementof Occupational Safety, Health and Work Environment in Confined SpaceB.E. 2547 (2004)3, administered by Thai Department of Labour. Furthermore,the Ministry of Public Health Announcement Regarding to the Principle,Procedure and Condition when issued the Medical Certificate to DemonstrateReadiness of the Seafarer on Board B.E. 2559 (2016)4, Maritime Labour ActB.E. 2558 (2015), administered by Thai Ministry of Public Health.

Occupational visual performance, which includes distanceand near visual acuity, color perception and visual field, is anon-invasive screening test.5 In Thailand, a vision screener isa recommended tool to rapidly perform visual screenings.Vision screeners are simple and easy to use, and have lowmaintenance costs and thus are considered as a useful tool forprevention services.

Titmus is one of the most widely used vision screeners.5,6Six vision tests are available to screen for:

This study was conducted in workers from BangkokHospital Phitsanulok who enrolled in the study, inclusioncriteria being a healthcare worker, 18-60 years old(working age)8, and absence of undergoing treatment for anocular pathology5 or monocular vision9. All participants weretested by occupational health doctors and nurses at the healthpromotion and occupational center, Bangkok HospitalPhitsanulok. Participants were asked to perform the tests withtheir actual vision while they were working (with or withoutcorrection e.g. glasses, contact lens) without further correction.Written informed consent was obtained and the study wasapproved by the Institutional Review Board (IRB) with COAnumber 2019-05 dated 24th January 2019.

220 subjects, was an estimate of the proportion of workerswith refractive errors.

This was calculated from the population proportion ofpercentage of refractive errors in adults11 and number ofworkers who attended the annual health examination in 2018.The subjects were sorted by hospital number (HN) in orderfrom lowest to highest. The first number is generated bycomputer, followed next by every other number.

A comparison was made between results obtained throughthe Titmus and traditional vision tests. The visual performancewas measured and the results were divided into 4 categoriesfor comparison as follows:

Visual acuities (VA): Visual acuity refers to sharpness andclarity of vision. Distance visual acuity (dVA) results reportedby Titmus were compared with 20-feet snellen chart withnumber optotypes. Near visual acuity (nVA) results reportedby Titmus were compared with 14-inch snellen chart withnumber optotypes. When partial lines of letters in snellen chartwere viewed and reported, the interpolation was then used toconvert the result into decimal acuity for each letter reportedcorrectly, e.g., 20/20-1 .975.12 This was done in order tofacilitate a more exact correlation between snellen chartdecimal acuity and that obtained by the Titmus. Any VAhigher than 20/20 was reported as 20/20. The VA was identifiedwith both eyes (BE), right eye (RE) and left eye (LE).

Color perception (CP): Titmus and the Ishihara colorperception both consisted of a series of color plates containinga circle of dots that appear randomly in color and size and wereused to diagnose red-green color deficiencies. The colorperception checks for a problem in recognizing colors but doesnot classify type or degree of severity. For Titmus, the participantswere asked to read eight digits in the six circles (the circleswere selected from Ishihara’s color perception). A grossmeasure of “pass” for Titmus is recorded if five or more fromeight digits in the six circles were identified.6 For this study,the measure of “pass” was eight from eight digits, theparticipants must answer all correctly otherwise it was recordedas “fail.” Then participants were asked to read the firsttwenty-one plates of Ishihara’s test for color deficiency: 38plates edition. The measure of “pass” was seventeen or morefrom twenty-one plates answered correctly.

Data were recorded and analyzed using the SPSS version23. A pass/fail score for this study was based on a visual jobstandard which was a minimum standard for use with thosewhose work involved machines (Job group 4: Operators). Thevisual requirement was at or just within arm’s reach.12 Sensitivityand specificity were analyzed to compare the accuracy ofTitmus results with the traditional vision test’s results. Kappastatistics was used as the measure for inter-rater agreementbetween eye screening tools. The percentage of reliability wereclassified in 6 levels, which are none (0-4%), minimal (4-15%),weak (15-35%), moderate (35-63%), strong (64-81%), andalmost perfect (82-100%).

A total of 220 workers participated, 177 (80.5%) femalesand 43 (19.5%) males. Participants were between 21 and 60 years old (mean age 34 ± 8.6 years) shown in Table 2.Participants had visual acuity ranges from 1.00 decimalacuity to 0.10 decimal acuity and stereoacuity ranges from 40arc sec to 400 arc sec. The mean VA and SA measure usingvarious tools are given in Table 3. Mean decimal acuity ofboth distance VA and near VA using snellen chart werehigher than that of Titmus. Mean SA reported by stereofly was1.5 times better than Titmus.

Sensitivity in this study was defined as the ability of thescreening test to detect all individuals who had worse sightthan occupational vision standard. Specificity was defined asthe ability to detect all individuals who met occupationalvision standard or better. The sensitivities of Titmus were95.8%, 90.9% and 100% for distance VA, near VA and colorperception respectively. Sensitivity of Titmus for stereoacuitywas only 64.3 %. Specificities were similar for distance VA,near VA and stereoacuity (64.8%, 61.7% and 68.2%respectively). Only for color perception, specificity of Titmuswas 100%. (Table 4.) Agreement of Titmus with standard testsranged from 63% (Near VA both eyes) to 100% (color perception).(Table 4.)

Figure 2: A comparison was made between results obtainedthrough the Titmus and traditional vision tests

Table 1: Fail criteria of visual job standards for this study14 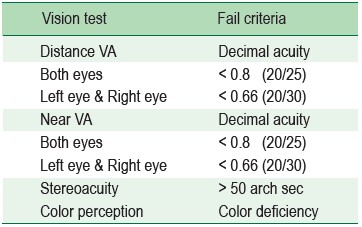 Table 3: Mean visual acuity and stereoacuity of each tool. Occupational vision screening aims to identify visualability that is out of the reference range for a safe and effectivelevel of productivity. There are several tests including distanceand near visual acuity (VA), color perception and stereoacuity.Titmus is one of the most commonly used occupational visionscreeners in Thailand.

The current study shows that distance and near VA resultsobtained from Titmus were lower when compared withstandard measurements. Apparently, the assessment of VAdepends on the optotype used for measurement. Our resultscorresponded with several studies that vision was generallypoorer with landolt C (used by Titmus) compared to snellenchart. Still, the differences were small.15-17 We also noted thatparticipants found it difficult to give answers for landolt C(used by Titmus). Related to a study among Thai population,Chaikitmongkol et al.17 agreed that the landolt C chartinvolved a longer test duration compared to number chart inboth normal and abnormal VA groups (1.7 times longer thanwith number chart in healthy eyes). It might be because the snellencharts with number optotypes are widely used in Thailand.

For stereoacuity, even though stereotest-circles test hadproven for good repeatability,18,19 our findings show thattraditional stereofly obtained better stereoacuity than Titmus.These might be an effect of different circle size and viewingdistance.20

The moderate level of specificity of Titmus for stereoacuity(68.2%) distance VA (64.8%) and near VA (61.7%) may leadto over referrals for an ophthalmologist.

Our results corroborate with various studies that there are nosignificant differences in color perception between Titmus andtraditional Ishihara’s Test.7,21 Correlation to Van Staden Det al.,22 this study proved that Titmus was a valid tool forcolor blindness screening (100% sensitivity, 100% specificity).

This study has some advantages of using health care workerswho are familiar with visual capacity and are likely to complywith testing protocols. Disproportion of male to female shouldnot substantially affect test results as the study does not try to identify prevalence of color deficiency. However, the facts thatsome subjects had inadequate correction of the visual acuitymight result in some information biases. Age and job assignments should not play significant confounding roles.

Limitations of the study were the inability to determinevalidity of horizontal phoria, vertical phoria and visual fielddue to limitation of equipment. Future efforts should focusmore on assessing the effectiveness of Titmus vision screenerby comparing the results to occupational vision standards (e.g.,drivers must able to read car plate and road signs).

Titmus V4 occupational landolt model is a valid occupationalvisual screener for color perception, distance and near visualacuity (sensitivity 100%, 95.8%, 90.9% respectively). For thestereoacuity, Titmus is not recommended to be used due to itsmoderate sensitivity and specificity (64.3% and 68.2%respectively). We suggest that further clinical evaluation shouldbe performed among those whose test is positive for Titmusfor more accuracy of the magnitude of abnormal visualperformance.

The authors declare that there was no conflict of interest.