Physical activity is a basic human function and an important aspect of a healthy lifestyle.1 It produces positive physiological, psychological and health-enhancing consequences.2 The benefits associated with physical activity, needed by every person in all age groups, including young adults, are an incentive to be active throughout life. Many recent studies have showed that many young adults have been physically inactive.3,4 This may be due to their modern lifestyle practices being less conducive to exercise or physical activity.1 This has led to serious public health consequences, especially the rise of global epidemics, Thailand included, providing evidence of the mismatch between lifestyles and levels of exercise or physical activity requirements.1

Physical inactivity has been identified as the most important behavioral risk factor for heart disease, stroke, depression and cancer.5 This leads to increased morbidity and mortality from non-communicable diseases (NCDs) such as cardiovascular disease, cancer, diabetes, and chronic respiratorydiseases, which are common worldwide.6 The global rates of deaths attributed to NCDs increased from 60% in 2000 to 70% in 2015 and 71 % in 2018.7,8 In Thailand, NCDs mortality rates increased from 64% in 2000 to 74% in 2016.9

Young adults are recommended to spend at least 150 weekly minutes of moderate-intensity, or 75 weekly minutes of vigorous-intensity aerobicactivity to improve their health.10 These activities refer to the bodily movements produced by skeletal muscles including activities at work, travel to and from different places and recreational activities. Physical activity helps improve health status and physical fitness.

Although there is strong evidence that physical activity provides numerous physiological and psychosocial benefits for young adults,11 physical activity in this age group is still declining; reflecting an increased sedentary behavior.12 However, according to self-reported data, about 40% of US young adults, ages 20 to 39, did not meet the recommended activity levels.3 This might be a result of being insufficiently active to achieve the health benefits of regular physical activity. A similar problem is also occurring in Thailand. A survey in 2011 showed that only 27.6 % of adolescents and young adults, aged 15 to 24 reported exercise in daily life and the number has dropped from the 29.3% reported in 2007.13,14 In addition, the report of physical activity among Thai population in 2015 also showed that adolescents and young adults, aged 15 to 24, had less physical activity of the moderate to vigorous level than that of other age groups.15 Moreover, 33.8% of Thai adults aged 18 years and above had high levels of physical inactivity.16 The report also showed that adolescent and young adults aged 15 to 29 spent more time on sedentary behavior than other age groups.17Young adulthood is a time of physical, psychological, social, and structural changes, which may influence barriers to and motivations for physical or exercise activity.18 University students represent a specific subgroup in this period as they are particularly affected by changing life circumstances, particularly in their study activities. Students’ daily lives are characterized by sedentary behaviors such as, attending university classes or doing more homework. However, exercise activity in this age group is important because future patterns of adult health are already established at this stage of life.19 In addition, obesity as a result of lack of physical activity in this age group can affect their health in later life.20 The age group of young adults is a period when many future health behaviors begin and provide an opportunity for interventions encouraging positive health behaviors including participation in exercise or physical activity. In order to promote health, an effective health promotion program for increasing exercise or physical activity among adolescents and young adults should be designed.

This study was a cross-sectional survey among students of Burapha University, Thailand.

After approved by the Institutional Review Board (IRB), Burapha University, Thailand (ID: Sci007/2562). Data were collected from February to May 2019.

The selection criteria for the samples included:

Sample size was calculated by using G-power 3.1.9.2 software; its general medium effect size of 0.15 was predicted, and α was set to 0.05. The power was set to 0.80, and the required sample size was 349. In addition, an extra 15% of the sample was required in case of missing answers. Therefore, at least 400 undergraduate students were required in total.

The tools were developed based on Pender’s health promotion model (HPM) framework, as this model covers a wide range of factors. It has been widely used for planning and implementing to change unhealthy behaviors and to promote health effectively. The HPM is based on social cognitive theory according to cognitive-perceptual factors, including the perceived benefits, barriers, and self-efficacy influence engagement in health-promoting behaviors. Modifying factors, including personal characteristics, interpersonal influences, and behavioral factors, are considered to interact with each other to influence the cognitive perceptual processes.21 Pilot testing of the tools was applied among 30 undergraduate students to evaluate item clarity and estimate the reliability before being used. A multi-section self-administered questionnaire was developed for this population. The first section of the questionnaire consisted of items on demographic data, including variables of sex, perceived health status, exercise experience within 6 months, type of exercise and frequency. The second part of the questionnaire consisted of physical activity perceptual factors. (Table 1)

During period of data collection, all participants had participated in the study, carried out in various places inside the university, including the library, computer center, and their faculty buildings. Research assistants approached potential individuals at those places and asked them whether they wouldbe interested in participating in the survey studying physical activity behavior. All individuals received information about the research and were told that their participation in this research was strictly voluntary. Individuals who agreed to participate signed an informed consent form and completedthe survey, which took about 15-20 minutes. All participants were thanked for their cooperation at the end of data collection.

A statistical computer software program was used to analyze data. Descriptive statistics were used to explain the demographic characteristics of the participants, and Pearson’s correlation was used to examine the relationship among the variables. Multiple linear regressions were used to analyze thepredicting factors of physical activity. In all tests of this study, p < 0.05 was set to be statistically significant.

A total 400 participants were included in the study and the average age was 18.65 ± 0.74. 94.75 % of all participants had no health problems. About 65 % of the participants were female. Nearly half, 192 (48%) of the respondents perceived themselves in good health. Most of them, 153 (38.25%),claimed to exercise once a month while 96 (24%) had not exercised in the past six months. For those participants who had exercised in the past six months 304 (76%), more than half, 259 (85.20%) and 198 (65.13%) of them, did exercise during 04.00-07.00 pm, at the public park. For physicalactivity, its related factors, including perceived benefit, perceived barrier, perceived self-efficacy, peer influence and environment influence, were reported by the participants. The participants revealed high level of physical activity, perceived benefit and perceived self-efficacy, and moderate level of perceived barrier, peer influence and environment influence. (Table 2) 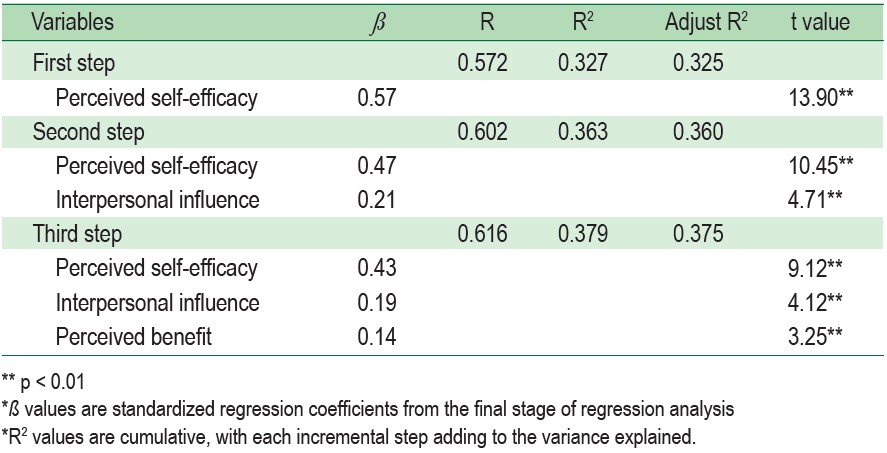 In this study, the greatest perceived benefit from physical activity of the respondents was psychological outlook followed by the benefits of physical performance, preventive health, and quality of life enhancement, especially their studying.

The perceived self-efficacy is the belief in one’s own abilities to perform a task or behavior. People with high self-efficacy can confront difficult challenges. People with low self-efficacy, however, are easily convinced of the futility of effort in the face of difficulties.26 Self-efficacy is based on theidea of the importance of the subjective experience of personal competence in realizing different goals, and not on actual knowledge, abilities and skills. Self-efficacy is assessed as a belief in their own capabilities to coordinate knowledge, abilities and skills to achieve the desired goal. Personal factors such as cognitive, emotional and biological factors, environmental factors and behavior have an interactive effect in the model of mutual determinism.27 The results of this research showed that perceived self-efficacy is positively associated with physical activity and can predict physicalactivity among respondents. The results of previous research also showed that self-efficacy directly affects physical activity of young adults.28,29

This study might have some limitations although it had been rigorously conducted. The samples comprised 400 undergraduate students representing a narrow age range; therefore, caution needs to be exercised when attempting to generalize to other contexts or populations. Nevertheless, the data were collected via random selection from four of seven health science faculties, and four of eight education and social humanity faculties, thus increasing the potential to generalize our findings to similar populations. As data collected were self-reported, it was essential to minimize respondent burden, so by keeping the questionnaire short, no information was collected on year of study, family care responsibilities, wider socioeconomic characteristics, or other possibly confounding variables. Further research would need to be conducted in a longitudinal study; it could provide evidence on directions of causality.

The respondents, who have a higher level of self-efficacy, perceived greater benefits of physical activity, and those who perceived greater social support from friends, have higher levels of physical activity behavior. To improve the health of the young adult age group, health promotion initiatives should be aimed at highlighting the benefits associated with being active and the importance of student’s perceptions of self- efficacy, benefits of physical activity and peer support. It is important to suggest based on the research findings that these factors can be applied to improve behavioral change interventions.