According to the World Health Organization (WHO)1 in the year of2010, the data showed that there has been a shortage and maldistributionof physicians in Thailand compared to other developed countriesworldwide, particularly in the Southeast Asia region. Moreover, the shortageof medical specialists has been even more pronounced.2,3 A good understandingof how medical specialists are distributed would promote the quality andefficiency of healthcare services. This is also very critical for medical specialistresource allocation between the private and public hospital network. However,the research data has been limited and not thoroughly explored so far.

For the public healthcare system, copious factors affect the demand forphysician’s services such as population dynamics (graying population, zeropopulation growth), changes in types of public health services and technologies,changes in economic and social status (urbanization), epidemics and pandemicsof diseases (HIV, Zika). All these lead to changes in response in the supplyand distribution of physicians and physician specialists in particular.

For the private hospital healthcare system, the number of physiciansrequired for each hospital depends on the missions and characteristics of eachindividual hospital4, 5 such as hospital’s level, size, facilities, and serviceplans, the number of inpatients and outpatients, the complexity and severityof the patients, the work hours per patient day (HPPD), the patient-physicianrelationship, and the Quality Assurance Services.2, 4-13

Evidence on how medical specialists are allocated would be useful forachieving equitable access to specialized care. Due to limited data from thepublic sector, therefore, this study is designed to be the first consensus- based survey in Thailand. The purpose of this study was to findpotential factors which will serve as a model for medicalspecialist allocation in a large private hospital network inThailand.

This four-round modified Delphi survey 14 was done byusing a questionnaire containing potential factors identifiedfrom reviewing published literature as well as interviewingthe experts who had extensive experience with human resourcemanagement or hospital management in the public and privatesectors. Executives who were part of BDMS management for 1 year or more were recruited from 32 hospitals. Therespondents were chosen based upon their willingness torespond to the survey and if they met required criteria asfollows: a) be in position assistant of director or above, b) haveextensive experience with human resource management orhospital management for at least 3 years.

The questionnaire for this study was developed frompublished literature review and was reviewed by the expertsfrom both public and private sectors for face validity. Forstandardization and comparison, based on the identified keypoints in the questionnaire, all factors were derived by themodified four-round Delphi study.

The first round was conducted among 32 representativehospitals. Each nominated executive was emailed a coverletter outlining the objective of the study along with a six-pagequestionnaire. The questionnaire comprised two parts:

Part 2: the participants are asked to rank 43 items and addon factors that will possibly influence the allocation ofmedical specialists in a free text response.

Descriptive data were presented as absolute numbers andpercentages. As the survey was conducted in four rounds, itemswith inconsistent values across the four rounds determined bythe interquartile range (IQR) larger than 1.5, were consideredunreliable and, therefore, were excluded. All items remainingafter the fourth round were considered as potential factors;their means and standard deviations were presented. All statistical analyses are performed using IBM StatisticalPackage for Social Sciences (SPSS). Version 22 for Windows.

Table 1: The Characteristics of Executives in the First roundand Fourth round 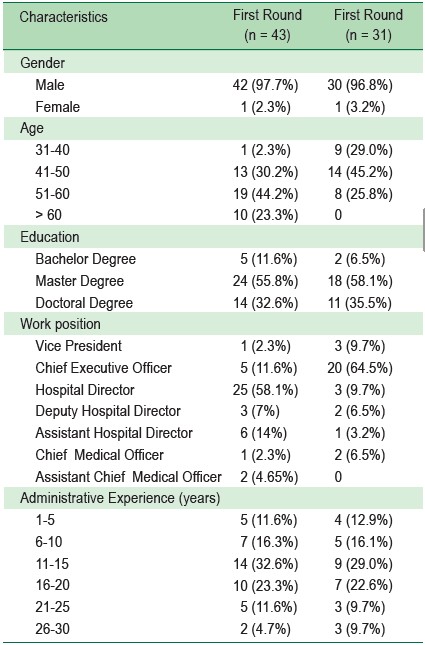 Focused on factors with a mean value of more than 4.5 andIQR less than 1.5, 6 out of 35 were considered as the mostaffected potential factors of medical specialist allocation:

This was the first survey undertaken in the largest privatehospital network in Thailand to ascertain the potential factorsof medical specialist allocation. The response rate of eachround was more than 75%. We have modified a uniform studyprotocol used in previous studies. The questionnaire wasmodified after a series of email questions and answers usinga modified Delphi technique. This process has been utilizedwidely in research which allows feedback and develops questionsusing a consensus-based approach. Therefore, all answers arebased on frequency and type of response from this Delphiapproach.

This study has identified 35 factors that determine theallocation of medical specialists. For factors with the meanvalue of more than 4.5 and IQR less than 1.5, a total of 6factors are identified to significantly affect medical specialist allocation. They include health need of the population,organization’s mission, organization’s Hoshin, organization’sstrategy, severity and complexity of patients. Regardingseverity and complexity of patients, these findings are consistentwith the study of Kalisch, et al.10, which reported that case mixindex and a measure for acuity of patient were associated withboth hours per patient day (HPPD) and nurse-reported patientworkloads.15 In addition to the previous point, comparingoutcomes of care by generalist and specialist, Smetana, et al.16found that most people preferred a specialist to a generalist.Therefore, the complexity of the patient may be one of thefactors for the need of a specialized doctor. Of 11 factors, forexample, gender, age, the residence of physicians showedinconsistent values and are not considered as potential factorsof medical specialist allocation in our study. In contrast,Wibulpolprasert S. 7 found that gender, age, and residence arefactors of medical distribution. These findings are similar toprevious studies that identified gender, age, the residence ofphysicians, qualified staff, as a negative outcome with theinequity of medical doctor distribution or allocation. 6, 17-20 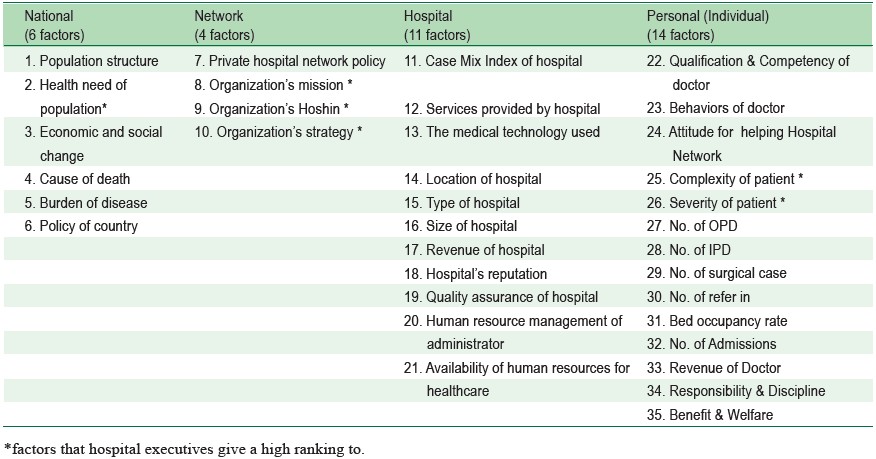 This research was funded by the Bangkok Dusit MedicalServices PCL. The authors would like to cordially thank allexecutives who participated in our study. We also thank allexperts for their valuable contribution to the research andsupport by Trin Charumilind MD, Prof. Prasit Wattanapa, MD,and Asst. Prof. Pradit Somprakit, MD.