Apical periodontitis is an inflammatory process that results in the destruction of the periapical tissue surrounding the tooth root. This condition is usually the sequelae of pulp disease, such as pulp inflammation or necrosis that may result from dental trauma, caries, or failed dental treatments.1,2

Due to its asymptomatic nature, this pathological condition is typically detected during routine dental examination and is initially managed by root canal treatment. However, many benign and malignant lesions, such as nasopalatine duct cysts, adenomatoid odontogenic tumors, squamous cell carcinoma, or breast carcinoma metastasis, are initially misdiagnosed as a periapical lesion of pulp origin. When there are no signs or symptoms in the inflammation area, this lesion requires further histopathological investigation to obtain a definitive diagnosis, especially lesions that do not respond to endodontic treatment or root canal retreatment.

To the best of our knowledge, there are few comprehensive reports on the clinical and histopathological aspects of apical periodontitis in Vietnam. The purpose of this study was to investigate the demographic information and histopathological diagnoses of the periapical lesions obtained from unsuccessful root canal re-treatment of anterior teeth in Vietnamese patients. The data obtained from this study indicate that dentists must strictly adhere to root canal treatment protocols and that surgeons should strongly consider submitting lesion specimens for histopathological evaluation to obtain a definitive diagnosis.

The study protocol was approved by the Ethics Committee for Research of the National Hospital of Odonto-Stomatology (NHOS), Hanoi, Vietnam (No. 01/HDDD-BVRHMTWHN). In this retrospective study, seventy-two patients with 72 periapical lesions located at the upper and lower anterior teeth were referred from the Department of Endodontics to the Department of Minor Oral Surgery for apical surgery due to a large, unresolved periapical lesion after root canal re-treatment. The study was conducted between October 2014 and February 2018. The patients were treated following the England Society of Endodontic guidelines for apical surgery.5 The patients were informed about the study details and signed consent forms before participating in the study. The demographic data, including the patient’s age, sex, and lesion site, were recorded.

The surgical procedures were performed as previously described.6 Briefly, the patients were treated under local anesthesia. A full thickness flap was reflected, and minimal cortical bone was removed to access the periapical lesion. The infectious tissue surrounding the apex was removed and submitted for microscopic examination. The root was resected 3 mm from the apex perpendicular to the long axis of the tooth and a retrograde cavity was made using ultrasonic tips. The prepared root face was filled with MTA. The flap was replaced and sutured. The patients were provided postoperative instructions and appointed to have a clinical examination and suture removal a week later.

The specimens obtained during the operation were immediately fixed in 10% neutral formalin solution for 24 hour (h) at 4°C with a specimen/fixative volume ratio of 1:10. These samples were dehydrated in graded alcohol and embedded in paraffin. Serial 5 μm sections were made using a rotary microtome and stained with hematoxylin and eosin7.

The histological sections were examined using a microscope by an oral pathologist and were reexamined after one week. The specimens were categorized into periapical cysts, periapical

granulomas, or periapical scars, according to a previous study.8 A diagnosis of a periapical cyst was based on the presence of epithelium completely or partly lining the cavity, and evidence of fibrous connective tissue. The epithelial layer was divided into stratified squamous and respiratory types. A lesion was diagnosed as a periapical granuloma when granulation tissue was present with or without epithelial layers. A periapical scar was diagnosed by the presence of a dense, collagenous connective tissue and a lack of inflammatory cells.

Additional lesion components were also recorded: cholesterol clefts, foamy histiocytes, dystrophic calcification, or foreign bodies. A mixed type of inflammation was determined when chronic and acute inflammatory cells were both present. The level of chronic inflammation was categorized into mild, moderate, or severe types with less than 25%, from 25‒50%, and greater than 50% inflammatory cell infiltration, respectively.8 Figure 1D and 2A illustrate the representative image of moderate and severe states, respectively.

The study comprised 72 biopsy samples from 72 patients with a female to male ratio of 1.7:1 and a mean age of 34.74 years (range 12‒65). Periapical granuloma was the most commonly diagnosed lesion with 45 cases (62.5%), while periapical cysts constituted 27 cases (37.5%). No periapical scars were found. The intra-correlation agreement was 0.91. The distribution of the periapical lesions by age indicated that they were commonly found in patients from the third to fifth decades of life. The prevalence of a periapical granuloma by age groups was highest in patients 20‒29 years-old with 16 cases (35.55%). These lesions infrequently occurred in patients 10–19 and 60–69 years-old with only 3 (6.7%) and 2 cases (4.7%), respectively. A periapical cyst was most commonly observed in patients 30–39 years-old with 10 cases (37.03%). No periapical cysts were diagnosed in those 50–59 years-old. We evaluated the lesion location and found that significantly more biopsy samples were derived from the maxilla with 53 cases (73.61%) compared with from the mandible with19 cases (26.39%) (Table 1). 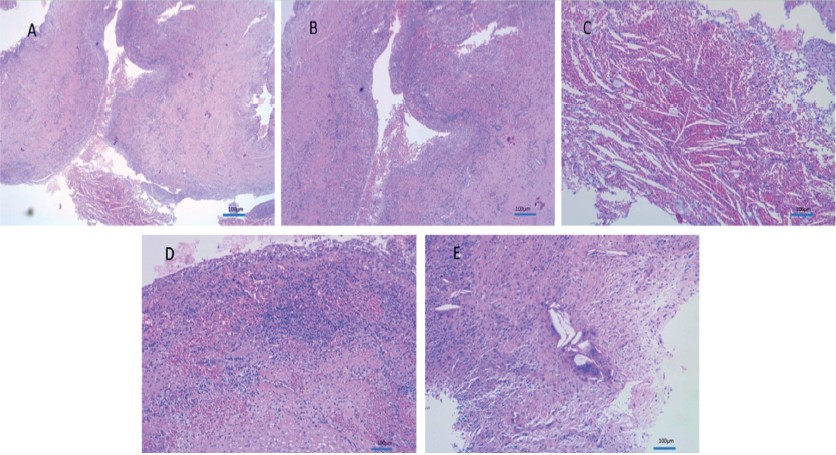 This study investigated the clinical-pathologic presentations of periapical lesions at the anterior teeth. Our results demonstrated that females were more likely to have a periapical lesion, comprising 64% of the biopsy samples. This finding concurs with those of other reports.7,9 The mean age (34.74 years old) of patients with periapical lesions in this study was similar to a previous study10 but differed from that of another study.7 The present study found a peak incidence in the fourth decade of life, which agreed with two other studies11,12 but differed from the third decade found by Akinyamoju et al.9 The possible explanations are Vietnamese female had a higher prevalence of periodontal disease than males, and the patient aged over 35 years old had more dental diseases than those aged under 35 years.13

Cholesterol clefts were found in 10 (13.88%) cases, of which 4 (8.8%) were periapical granulomas and 6 (22.2%) were periapical cysts. This incidence was comparable to that (11.7%) of a previous study,8 but lower compared with another study24 that reported that the frequency of cholesterolcrystals in periapical lesions varied from 18‒44%. It was also demonstrated that the presence of a cholesterol cleft in a periapical lesion prevented healing of these lesions because root canal treatment or retreatment cannot eliminate these materials.2 Dystrophic calcification and foamy histiocytes were present in 30 cases (57%) and in 13 cases (40.7%), respectively, which was more frequent compared with other studies.8,25

We identified foreign bodies in one (3.7%) periapical cyst lesion case, which was higher than that of 0.4% reported by Stockdale and Chandler,12 but lower than other reports.1,8 The origin of foreign bodies in the present study came from root canal filling materials, which was in agreement with the two previous studies.8,25

All authors declare that they have no conflict of interest.