CHORDOMA MANAGEMENT: A REVIEW OF THE LITERATURE

Chordoma is an uncommon bone neoplasm. Despite being considered a low-grade orbenign bone tumor because of its histology, it is aggressive and locally invasive. It has apoor prognosis because it has a high rate of recurrence and is likely to be malignant.Chordoma is usually recurrent. Although its histology is considered a low-grade tumor orbenign tumor, its behaviour of recurrence leads to a poor prognosis and higher likelihoodof malignant tumors occurring. Chordoma is believed to emerge from transformed remnantsof notochord and appears to favor the axial bone. The most commonly affected parts ofchordoma are at the sacrum, vertebra, and skull base. The present gold standard formanagement of chordoma is a wide surgical resection. This article highlights recentpractices and future directions for treatment.

MEDIA
Figure 1: A: Film sacrum AP, B: Film lateral, the mass was accidentally palpated during an annual gynecological examination. From plain radiographs showing a large soft tissue mass with extensive osteolytic lesion with its epicenter at the sacrum. 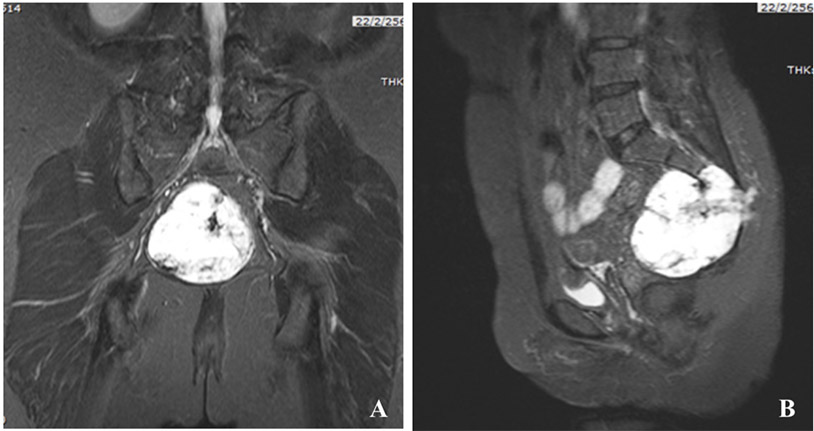