AGEP is a severe cutaneous reactions to drugs,1 approximately 90% of cases are caused by medications and other particular cases are induced by viral infections or mercury hypersensitivity. 2 Typically, patients with AGEP present with rapid onset of many non-follicular, sterile pustules on an erythematous base. The most common sites are intertriginous zones, trunk, and upper extremities, conversely mucous membrane is rarely involved. Fever and leukocytosis are often accompanied with skin manifestation. Histology is a confirmation test. Discontinuation of the causative drug and symptomatic treatment is the best management. All skin lesions resolved spontaneously within 15 days.3,4

Imipenem, a broad spectrum carbapenem antibiotic, has potent activity against Gram positive, Gram negative and obligate anaerobic bacteria. Imipenem is widely used to treat nosocomial infections, especially Pseudomonas aeruginosa, extended beta lactamase producing and Amp-C producing pathogens. Imipenem is well tolerated, and has a low incidence of adverse drug reaction. The most common adverse effects are gastrointestinal disturbance, cutaneous hypersensitivity reaction and seizures in patients with cerebral cortical lesions, a history of seizure, or renal insufficiency.5-7 This report describes AGEP caused selectively by imipenem in the patient, who was able to tolerate ertapenem.

A 65-year-woman with systemic sclerosis and CREST syndrome (calcinosis, Raynaud phenomenon, esophageal dysmotility, sclerodactyly, and telangiectasia) was re-admitted due to relapsing Salmonellosis. At the last admission, she presented with fever, abdominal pain, and acute diarrhea.Salmonella group B was isolated from blood culture. She was diagnosed with Salmonella group B septicemia and treated with intravenous ertapenem for 2 weeks. Around 3 weeks after being discharged from hospital, she had fever, malaise, anorexia and back pain for one week. Plain thoracic spine radiograph revealed a fracture of the 7th and 9th thoracic spine. She had a declined renal function, T1W with Gadolinium was not performed. Blood and urine cultures were positive as Salmonella group B being resistant to third generation cephalosporins and fluoroquinolones and sensitive to trimethoprim-sulfamethoxazole, carbapenems. The physician suspected Salmonella osteomyelitis of the thoracic spine and treated with intravenous ertapenem for 2 weeks then switched to oral trimethoprim-sulfamethoxazole, sulfonamide group.

During a course of trimethoprim-sulfamethoxazole for 3 weeks in the hospital, she had a productive cough, body temperature of 38 degree Celsius (°C), respiratory rate of 20 breaths/minute and left lower lung alveolar infiltration on chest radiograph. She was diagnosed with hospital-acquiredpneumonia and treated with intravenous imipenem, coverage nosocomial pathogens especially P. aeruginosa and Salmonella group B. Oral trimethoprim-sulfamethoxazole was discontinued on the 3rd day after intravenous imipenem was started.

On the 8th day of imipenem therapy, she developed pruritic erythematous rash on her face, trunk, arms and legs.

Numerous, small pustules appeared on erythematous base of trunk, arms and legs (Figure 1). There was no mucosal lesions and internal organ involvement. Her body temperature was 38 °C. The complete blood count revealed a marked increase in white blood cell count and a neutrophil cell count at 34,400/ mm3 and 27,176/mm3, respectively. Small pustules increased during treatment of imipenem until the 14-day course had been completed. AGEP was suspected, caused by imipenem. She was treated with oral antihistamine and topical corticosteroids. One day after discontinuation of imipenem, pustules decreased while oral trimethoprim-sulfamethoxazole was restarted for Salmonella osteomyelitis. Skin pustules disappeared within 4 days, followed by desquamation (Figure 2). Skin biopsy and patch test was not requested. Naranjo’s algorithm revealed as probable adverse drug reaction (ADR) due to imipenem. She had no previous history of adverse reactions to any drugs and no history of psoriasis.

Figure 1: Small pustules (less than 5 mm in diameter) on erythematous base affecting legs. 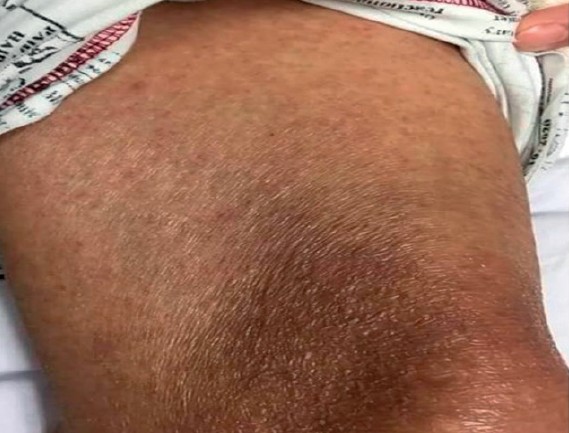 AGEP is one of severe cutaneous adverse reactions (SCARs) to drugs, less severe than Stevens Johnson syndrome, toxic epidermal necrolysis, and drug reaction with eosinophilia and systemic symptoms. Mortality rate is about 5%.1 AGEP has been classified as a T-cell mediated delayed-typehypersensitivity reactions, subtype IVd. CXCL8 (IL-8), a potent neutrophilic cytokine, plays a role in the formation of pustules by recruitment of neutrophils. 3,8,9

AGEP is characterized by many small (less than 5 mm in diameter), sterile, non-follicular pustules on an edematous erythematous bases. The distribution of skin lesions usually develop on the trunk and intertriginous regions. AGEP often arise rapidly, typically within 48 hours (ranging from 1-10 days) followed by desquamation of affected skin. Nonetheless, mucous membrane is rarely involved. Skin eruption is usually associated neutrophilic leukocytosis (neutrophil count > 7,500/mm3) and fever (≥ 38 °C). Histology is a confirmation test, shows spongiform subcorneal and/or intraepidermal pustules with papillary dermal edema containing neutrophilic and eosinophilic infiltrates, necrotic keratinocytes, and leukocytoclastic vasculitis. There is no specific treatment for AGEP. Symptoms and signs generally resolve spontaneously within 15 days after the offending drug is discontinued. Diagnosis of AGEP depends on clinical characteristics and histopathology.3,4 Diagnostic criteria from the EuroSCAR study group helps to diagnose AGEP. The AGEP validation score is between 8-12 and 5-7 and defined as definitive diagnosis and probable diagnosis, respectively. 4 In this case, a score of 6 indicated probable AGEP because of the atypical distribution of the rash and a skin biopsy was not requested. Probable AGEP due to imipenem was diagnosed on the basis of Naranjo’s algorithm.

Commonly, AGEP is related to an adverse drug reaction. Sidoroff et al reported several drugs strongly associated with AGEP such as pristinamycin, aminopenicillins, quinolones, (hydroxy) chloroquine, anti-infective sulfonamides, terbinafine and diltiazem. Furthermore, other drugs less associated with AGEP were reported such as corticosteroids, macrolides, oxicam nonsteroidal anti-inflammatory drugs and antiepileptic drugs except valproic acid.2 Bauer et al.,10 report sporadic cases suffered from AGEP caused by imipenem. Although imipenem always combines with cilastatin, current data cannot discard adverse reaction from cilastatin. Certainly, the literature does not report hypersensitivity from cilastatin alone. In 3 retrospective studies it was reported that imipenem is associated with AGEP (5-10%). Su et al.,11 showed that imipenem was the culprit drug in 1 of 10 AGEP cases (10%). Konyoun et al, 12 reported 1 of 25 cases of AGEP (4%). Thienvibul et al reported 1 of 19 cases of AGEP associated with imipenem (5.26%). The onset of illness was 4 days. Skin eruptions were distributed on the upper back. Neutrophil was 9,316/mm3 and the diagnostic score was 6 (probable AGEP). 13

Carbapenems are broad spectrum beta-lactam antibiotics. Ertapenem, imipenem and meropenem are commonly used in this class. Only ertapenem does not have activity against non-glucose fermenter gram negative bacilli (Pseudomonas aeruginosa, Acinetobacter baumannii). Carbapenems have a beta-lactam ring attached to a modified thiazolidine ring and 2 different side chains. Imipenem is degraded by renaldehydropeptidase I (DHP-1) but ertapenem has a methyl group at C1 that protects from degradation. Administration of imipenem in combination with cilastatin can increase half-life and tissue penetration of imipenem. Ertapenem differs from imipenem by having a pyrrolidinyl substituent at C2 with a meta-substituted benzoic acid group. Ertapenem differs from meropenem in 2 substituent with a meta-substituted benzoic acid group.7,14 Lakhal K, et al.,15 reported the first document of nonimmediate hypersensitivity reaction to imipenem-cilastatin and no cross-reactivity between imipenem and meropenem. The patient experienced erythematous macular morbilliform rash due to imipenem and no adverse reactions when meropenem was parenterally administered. Intradermal skin test of imipenem and meropenem were positive and negative respectively.15 Noguerado-Mellado showed 2 cases of T-cell mediated delayed-type hypersensitivity reactions. In the first case, the patient had delayed-onset micropapular exanthema associated with imipenem, except meropenem. Intradermal imipenem skin tests were positive, but intradermal meropenem and cilastatin skin tests were negative. The second patient developed generalized scaly erythematous rash from meropenem. Intradermal skin tests of meropenem and imipenem were positive and negative respectively.16 It is implied that lack of cross-reactivity between imipenem and meropenem and side chains may play an important role in hypersensitivity reactions. Moreover, cilastatin may be a causative agent.

Imipenem-induced AGEP is an uncommon and usually sporadic case. This case report was diagnosed as a probable AGEP, caused selectively by imipenem, treatment Salmonella osteomyelitis and pneumonia. Although ertapenem can be used safely, imipenem should not be reintroduced. If carbapenem therapy is essential, re-challenge of other carbapenems may be used cautiously.16

Table 2: Naranjo algorithm for assessing the causality of an Adverse Drug Reaction (ADR) 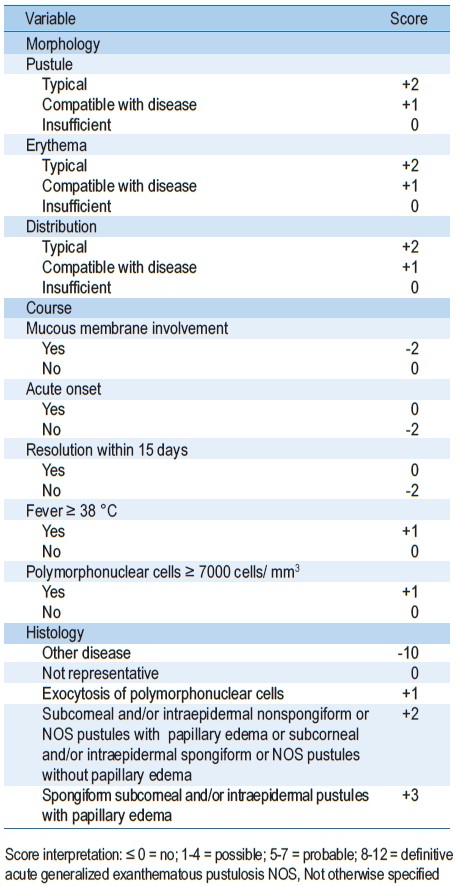